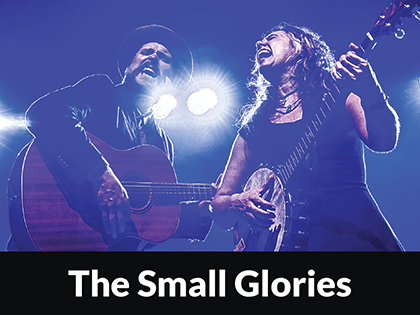 Roots powerhouse duo The Small Glories are Cara Luft & JD Edwards, a musical tour-de-force partnership planted on the Canadian Prairies.
With a stage banter striking a unique balance between slapstick and sermon, these veteran singer-songwriters have a way of making time disappear, rooms shrink, and audiences feel as though they are right there on the stage with the band. Luft and Edwards duplicate and reinforce each others’ many strengths and yet allow their distinct personalities to shine through, resulting in a live show that is as heartwarming as it is hilarious, as finger-picking proficient as it is relatable, and as Canadian as, well... it’s very Canadian.
They have been winning over audiences from Nashville to the Australian Outback. The duo won “Artist of the Year” at the International Folk Awards in New Orleans 2020, with their highly anticipated sophomore album Assiniboine & The Red garnering 3 Canadian Folk Music Awards, a JUNO Award nomination, Critics’ Choice for ‘Album of the Year’ in Penguin Eggs Magazine, and captured the #1 Folk/Roots album spot on the national !Earshot radio charts.
Come and meet your new favourite band.
TICKET PRICE: $28 | $25 MEMBERS + taxes & fees = $35.65 | $32.20 Members
***********************************************************************************************
PLEASE NOTE: the deCoste 'On the Road' Series will be travelling throughout Pictou County presenting amazing shows like this one at different venues while we're under construction with the addition of the Pictou Library and expansion of the deCoste. The SMALL GLORIES show is being held at THE MERIGOMISH SCHOOLHOUSE COMMUNITY CENTRE, 1682 Shore Road, Merigomish, NS

Build Back Better - Taking the Show on the Road

It's been an interesting couple of years as we navigated the challenges of COVID-19. Now we are beginning an exciting upgrade and expansion. Our current facility will more than double in size, with the addition of a beautiful new public library and expanded meeting/event space. We are calling it a "Cultural Hub" because it will bring together many cultural groups and experiences. While our theatre will not grow in size (it is the PERFECT size), it will get a top-to-bottom refresh. We have one of the best sounding rooms in Atlantic Canada and a venue that draws patrons from all over, so we "are not gonna fix what is not broke". After eight years of planning and consultation, we are excited to be building a facility that addresses so many of our challenges and opportunities.

Although we will need to continue to adapt, and find new ways to keep the shows and events rolling, it will be worth it when we can reopen as one of rural Nova Scotia's most innovative art centres. Look forward to:

Learn more about the project by visiting our micro-site: http://www.culturehubpc.ca

In order for construction to occur efficiently, we are taking our shows on the road, partnering with  awesome venues throughout Pictou County including:

The deCoste opened 40 years ago in November of 1982. We are planning to celebrate this important milestone from November 2022 until November 2023. Taking our shows out into the county to various communities and venues is a great way to say, "Thank you for 4 decades of support."

While we are preparing to start construction, our community fundraising campaign continues. We have reached the 85% mark and are thrilled with the fantastic support we have received from patrons, companies, foundations and community organizations. Pictou County has long embraced the deCoste as a true gem and important element in our amazing quality of life.

No donation is too small, and we welcome “in memoriam” donations and pledges over up to three years. Donations over $25 will receive a charitable receipt and donations over $250 will be acknowledged on a donor wall in the new facility. Keep an eye out for a "Take a Seat" campaign in 2023 to fund brand new seating for the theatre. For more information, visit (www.culturehubpc.ca) or contact Troy to discuss a contribution (troy@decostecentre.ca).

Thank you for your incredible and continued support as we navigate through our next adventure!  We can't wait to see you at one of the shows!